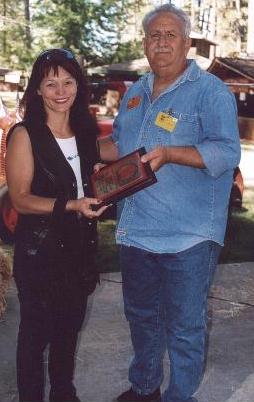 As chairperson for the Early Day Gas Engine & Tractor Association Hall of Fame I am proud to announce Bill Neatherlin from Diamond Springs, California for Hall Of Fame 2002. Bill was selected from an extensive list of nominees and selected for his contributions to our hobby. His daughter, Kathy Seed, accepted Bills award.

Bill joined the Early Day Gas Engine and Tractor Association, Branch 13, in 1974 after his neighbor Charles Wallace got him interested in collecting and restoring old iron. Over the years, Bill collected more than 50 engines and several tractors. He could always be counted on to bring something interesting to every show. From the beginning, Bill worked to help his fellow hobbyists and to educate the general public about our activities. Bill served as editor of the Branch 13 Chugger newsletter in 1983 and 1984. He was president of Branch 13 for four years, 1986-1989, a time in which the membership grew tremendously. He was a perfectionist, attending to the organizational details to make sure things went smoothly and everyone had a good time. Bill served as Chairman of the 1993 EDGE & TA National Show and Meeting at Grass Valley, overseeing the production of one of the best National Shows in memory. He also was Branch 13’s National Director in 1994-1995.

On a personal level, Bill was born in Oklahoma in 1928. At the age of 17, Bill took off for California to start a life of his own. He worked at Placerville Lumber Co., doing everything from felling trees to general yard work. Eventually he became a sawyer, where in 1960 he helped construct and operate the first automated sawmill in California. Bill first met his wife Dollie at the age of 14. After several years of courting, they married in 1947. Bill was a dedicated family man and was very close to Dollie, as well as his two daughters, Karen and Kathy, four grandsons, and one great grandson. He passed away April 18, 1995.

Bill was always friendly, outgoing, and enjoyed the fellowship and camaraderie of his engine and tractor friends, not only here, but throughout the nation. He attended most of the National Shows and knew people and had friends in almost every branch. He believed in the gas engine and tractor hobby and worked hard to increase the national membership, to encourage the growth of new branches, and to make the entire organization successful. He often did this at his own expense and was willing to cut short his own play time with his engines to do so. He was a tremendous supporter of new members and went out of his way to help them whenever he could. We were privileged to have been in his company. His standards and leadership are one of the cornerstones of our Branch.

As an EDGE&TA member, Branch Officer, and National Officer, Bill Neatherlin distinguished himself greatly through his active leadership at both the Branch and the National levels. He worked tirelessly promoting our hobby, serving the membership, and made significant contributions in leading the National Association toward the future. His efforts, contributions and memory are truly deserving of special recognition.