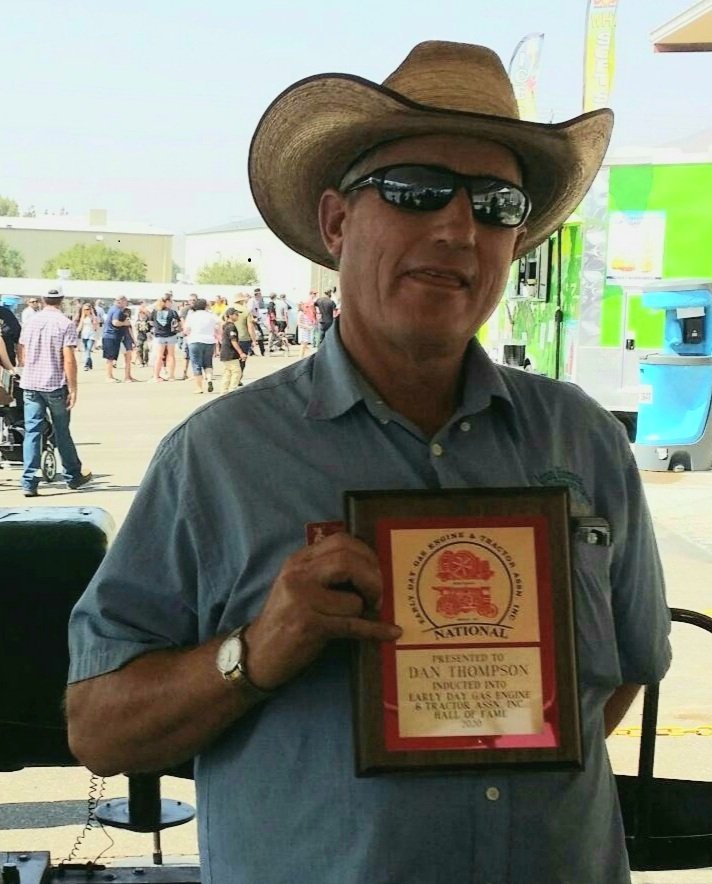 Dan Thompson is a Charter member of EDGE&TA Branch 106 which was formed in 1999. He  has always been an active member who has held the office of President several times and has also served as Vice President and Activities Director.  He is now serving as President again.  This is a very active branch that has 10 parades and shows listed on their branch webpage.

As a young man Dan Thompson worked at several farms in Northern Nevada to learn the trade and the equipment used.  Currently retired, he works part time as a substitute teacher in the local school district; in Lowry High in the Future Farmers and Industrial Shop classes.  He works with the high school students and encourages them to be participants in the agriculture community.  He tries to recruit new members to join EDGE&TA while showing these students how to repair and restore old equipment.  He tries to get the kids excited about our hobby.   Mr. Thompson has been a volunteer participant with AG in the Classroom Workshops for the younger students in the district.

Dan and other members from Branch 106 display at the “Lazy P Farm” Fall Festival sharing tractors and stationary engines answering questions about how they work to all who inquire. One of Dan’s favorite things to do is run the rope making machine creating bracelets for the kids.

Dan’s interest is both tractors and Stationary Equipment.  His 1907 Fairbanks Morse “N” 15 horse power winch engine is fully operational and was used in the local mines of Humboldt and Lander Counties in Nevada.  Dan displayed this unique engine at the North West Regional Show in Filer, ID and drew a huge crowd.  The Fairbanks Morse and several other hit n miss engines are displayed at various EDGE&TA sanctioned shows each year.

Dan is a true leader and has planned several club activities from Tractor drives, Campout’s, BBQ’s, Annual Labor Day parades and County Fair displays where other EDGE&TA members from Oregon and Nevada have participated. Dan also has planned club activities such as tours at the Giodano Ranch and MSC facility in Fernley, Nevada.  He works year around to keep his branch active.  Dan always encourages other members to participate at events held by other branches of EDGE&TA.  He travels to all the western states to display his old equipment at shows.

In closing please consider Dan Thompson for induction into the “Hall of Fame” as he has demonstrated his true love and passion for the preservation and exhibition of early day engines and tractors.