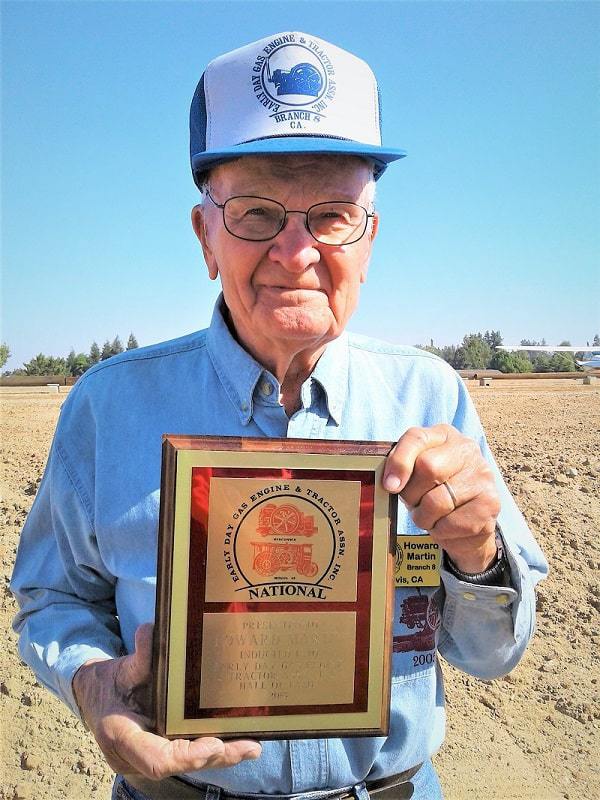 Howard was a Charter member of Branch 8 and instrumental in establishing this branch in 1981. He has been an active member all the years since then. He has collected and restored antique tractors, one cylinder engines and various old farm equipment. He was the Branch 8 President the year that branch hosted the National Show in Merced back in the 80s. He worked very hard to make that show happen. He has always been faithful to exhibit at the various shows and events throughout the year. He is a dual member of Branch 63 and actively participates in events there also.

He is a retired Mechanical Ag Professor who taught at Fresno State University where he shared his mechanical ability with his many students, some of whom became active EDGE&TA members. He has helped me and many members with seeming impossible problems with these sometimes stubborn old machines. One time at a club show his engine quit and he tore it apart to find that the head gasket was shot. So, since we were all busy showing and not near a parts store he proceeded to make a gasket from a Wheaties box he had in his pickup. That engine ran perfectly the rest of the show. He has built a unique engine/water pump from a Briggs and Stratton and other parts and calls it Crazy Ike. People stop and stare at the engine moving up and down and the pump remaining stationary whenever he has it running at shows. He has also been known to hard boil eggs in his engine hopper and have a nice hot meal for lunch while never leaving his display.

Howard has loaned his tractors for display at the Heritage Museum in Tulare for many years where they can be enjoyed by the public. He has driven in many parades and enjoys all aspects of this hobby. In the 60s he restored a kit crawler from the Popular Mechanics magazine and named this little garden tractor, Kiddy Pillar. This little crawler has entertained kids of all ages for over 50 years now. It was a big hit at the 2017 National Caterpillar Show.

All in all, Howard has been an inspiration to many of us in the club and we thought it was time for him to be recognized for his many accomplishments. He is a vital part of Branch 8.