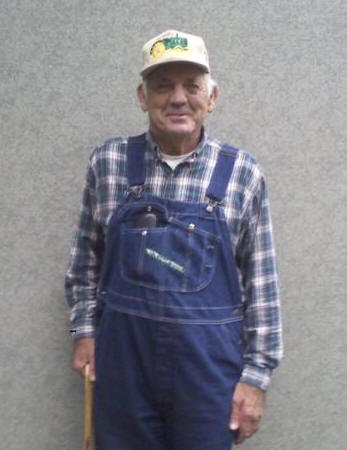 Joe Hutchinson became a member of Branch 16 EDGE & TA in 1982. At that time, he was interested in tractors and already owned several F-12s, F-14s and a Farmall H. Since then, his collection has grown to include John Deere and Massey Harris equipment in addition to his original Farmalls.

Joe is a native Missourian who grew up in the country and developed an appreciation for farm equipment at an early age. Joe was born March 1st, 1937 in Ava, Missouri, just east of Springfield, Missouri. Due to family circumstances, Joe never graduated from high school, but was able to travel to Kansas City, Missouri in 1958 to learn auto body repair skills, which has helped him with his tractor collection.

After leaving Kansas City, Joe settled in Springfield, Missouri and started working at Dayco. Joe was a long-term employee at Dayco and retired in 1997.  Along the way, Joe married his wife Joanne in 1963 and they had one daughter.

Joe has many unique talents that have allowed him to make a variety of contributions while being a member of Branch 16 EDGE & TA. One of these unique talents that all of our members have enjoyed is Joe’s ability to build wooden toys. At a young age, Joe’s parents couldn’t afford to buy very many toys for him and his brothers, so Joe made his own toys out of wood. Joe built tractors out of any pieces of wood he could find while growing up. As Joe got older, he stopped having time to make toys, until his brothers convinced him that he was very talented and should get back to his hobby of toy making. Today, Joe receives many requests from individuals to custom make toys. All Joe needs is a picture of what you want him to make, it can be a tractor, steam engine or a car. Once Joe gets the picture, you can be guaranteed you will receive a work of art that is true to scale and painted appropriately. To date, Joe has made more than 500 of these toys.  Joe is very generous with his toys as well and has donated several to the club over the years to be raffled off to benefit the club.

Not only is Joe talented in making these toys, he is also very generous in donating his time to the club. You will find Joe helping at the grounds on workdays doing whatever might need to be done. During our September Show, Joe will greet exhibitors at the entrance gate in the mornings. Joe spends several hours at the entrance gate in the mornings answering questions and directing people to where they need to go.

Joe has served for many years on the Board of Directors for Branch 16 EDGE & TA. Joe also enjoys representing Branch 16 at shows and local events and displaying some of his tractors and wooden toys.

Joe is a huge asset to Branch 16 EDGE & TA and has overcome many obstacles in his life. When Joe was born, his parents were told that he would never walk due to having cerebral palsy. Anyone watching Joe in action would never know he had been born with this handicap.

Branch 16 EDGE & TA could not function as well as it does without the help of Joe Hutchinson. All of our members greatly appreciate Joe for all he does. We feel that Joe is very deserving to be inducted into the Early Day Gas Engine & Tractor Association Hall of Fame.