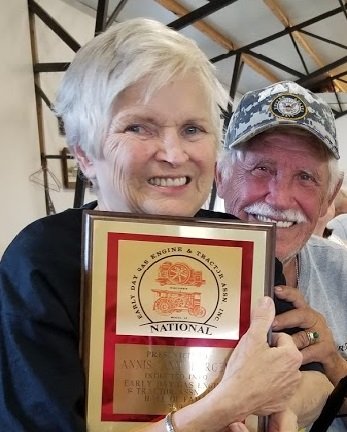 When an established antique tractor and engine club purchases land for a permanent home, persons in the neighborhood have to be impacted. That was certainly the case when Tired Iron of the Ozarks, Branch 37, bought 17+ acres next to Johnny and Ann Burger. All Johnny‘s work to build Tired Iron and his support as an EDGE&TA director was recently recognized by his induction into the EDGE&TA Hall of Fame. Ann Burger was in step with Johnny the entire way, and it becomes obvious that all her involvement in maintaining many elements of the club and furthering the goals of EDGE&TA and Tired Iron earn her a nomination to the Hall of Fame. When Tired Iron built a club house, maintenance became a serious concern. Active members might not know that Ann has worked tirelessly to keep the clubhouse clean. She has been diligent at the task for the fourteen years the building has existed. The week before our twice yearly shows she sets off bug bombs to control the insects in the building, which incidentally sits in what was a hay field. All the cleanliness is extra important since the clubhouse includes a kitchen to serve visitors during the show.

And, who says a woman cannot do ground maintenance? Anyone who has seen Ann with her wheeled weed–eater as she trimmed huge areas will know what determination can do. As importantly, areas that defied trimming were and are sprayed for control of the grass and weeds. Lots of members work on the grounds, but none more than Ann.

Another very important activity is her devoted attention to the club‘s Home Antique building, which houses an amazing collection of items. Ann and her helpers do what equates to a professional effort with the building and its contents. Ann sees to it that the best arrangements are made for display of kitchen items, of bedroom furnishings, of an early 1900s school room, of cabinet displays of numerous, etc., which amaze visitors. Perhaps Ann‘s greatest attraction is her sewing machines exhibitions. She interests young people to the use of treadle machines and allows them to sew first hand. Many photos are taken by news reports for full–page presentations of the Home Antique building. Most photos are of Ann. Her lively descriptions of her work assures that. At the end of each show, Ann cleans and packs away delicate items for protection so they will be in great condition for the next show.

With the mention of her husband as a former director of EDGE&TA, it should not be a surprise that Ann accompanied Johnny on most of trips for our national club. Again, she emerges as a favorite to everyone in her activities for EDGE&TA. No one can imagine a better ambassador for all the organization stands for.

Both Burgers have been and are great contributors of all they have, including their donation of money to many projects, the use of their modern tractor for land preparation and maintenance, and, most of all, for their countless hours in furthering everything EDGE&TA and Tired Iron. We, the members of Branch 37, respectfully nominate Ann to the Hall of Fame.