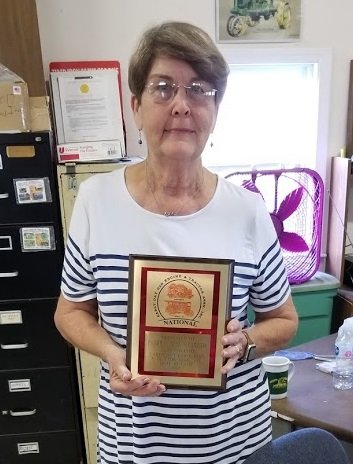 Patricia “Pat” Morrison joined Tired Iron of the Ozarks in 2001. She has been an active member ever since. At the time she joined, the club was engaged in a search for land to purchase as a permanent base for club shows, but, in the meantime, shows were held on borrowed property, which included the grounds of a local airport and a wild–life safari. A couple of shows were held in a large circus tent. This was not much to encourage involvement of the wives of club members, but Pat participated every step of the way,

A big activity for many club members was and continues to be to attend club shows and community activities throughout a four–state area to acquaint people with Tired Iron and the marvel of vintage tractors and engines. For example, our clubs exhibitions of fly–wheel engines are known throughout the region. Pat‘s valuable contribution was to attend her and her husband‘s exhibits at these scores of venues. She can and does tell folks the backgrounds of the four–wheel 1946 Gibson, a riding, (and rare) 1947 Perrin, and much more. She even exhibited basket weaving for a time. Many people have enjoyed the information and look at their unusual tractors and craftwork.

When Tired Iron purchased land for the club in 2003, active members now had a great responsibility to build and maintain facilities for club activities. Bathrooms were built in 2004 and a clubhouse in 2005. With the note that Larry and Pat live only 4 miles from the club land, she, especially when her husband served as president of Tired Iron for three years, spent time almost every day at the club. Clubhouse up–keep became very important. She, along with a few others, have seen to the sweeping and arranging of the building for all occasions.

Since the club grounds are at least five miles from food services, it was very important that our club kitchen, which had been added to the clubhouse by some determined members, be used to provide food for the visitors to the shows. For a few years Pat was in charge of all the food concession. She bought all drinks and food for the occasions. The kitchen served doubly for Tired Iron in that profits were added to the general fund of the club and helped provide backing for many projects.

Another important part of club activity she takes a lead role in when needed is the preparation of three potluck dinners every year for the club membership. Perhaps, more importantly, she brings home–made cookies and other goodies and provides coffee and soft drinks for people attending the meetings.

Pat currently serves as treasurer of Tired Iron. As a part of her job, she collects dues and maintains the club roster. Every club needs members such as she, and this fact serves as the basis for our club members‘ nomination of Pat to the EDGE&TA Hall of Fame.