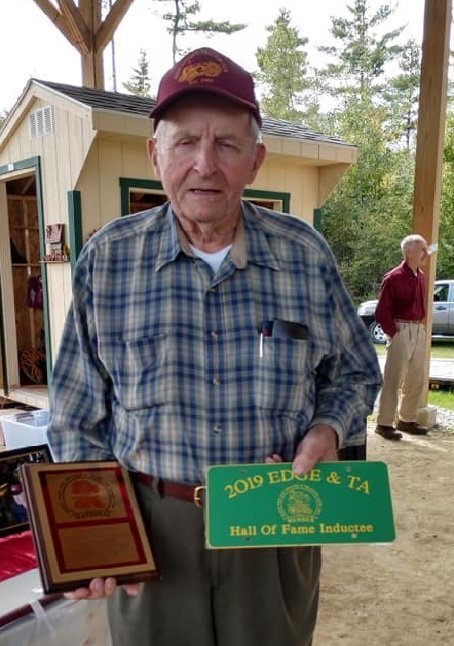 I would like to nominate William (Bill) Clark for the EDGE&TA Hall of Fame on behalf of EDGE&TA Branch 133, The Maine Antique Tractor Club, located in Norridgewock, Maine.

Bill is one of the Founding/Charter Members of our club which started in 1994. Bill has served as President and is a long time Board Member who is very active with the events, meetings, and the direction of our club. Bill has not missed any meetings or events, with the except of a couple, in our 25 year history. He is the “go to” person for our annual antique tractor raffle which is held each year to sponsor our “Club Member/High School Senior Scholarship Fund”. Bill searches, negotiates, (usually gets the tractor donated to the club), trailers, fixes, and sells tickets at numerous locations throughout the year, to make our antique tractor raffle very successful. “Like to buy a ticket”? Bill has one in his front shirt pocket at all times. Bill can be seen at most all the antique tractor pulls on his John Deere 730. He has some very heavy competition as he is in the same class as his brother, Bob, on his John Deere 720, which makes for some very good ribbing on most days. Bill’s oldest son, Gary, is also a Founding/Charter member and current Vice President of the club. Three of Bill’s grandchildren are active members in the club, all pulling in the antique Lawn & Garden pulls and two have moved on to the larger Farm Tractor Pulls. Bill can be seen in many of the parades our club participates in, usually following the grandchildren, as they proudly parade their antique tractors for all to admire. Bill, his wife, and family host the April monthly meeting each year by inviting club members to their home for a pot luck meal, meeting, and a tour of the farm. One of the clubs most heavily attended meetings of the year.

Bill, being raised on the family farm, comes by tinkering naturally as he worked closely with his father buying, selling, and fixing tractors and other agricultural equipment in his spare time as a younger man. Something he continues to do today, along with his son and grandsons, in the same location on the Skowhegan homestead. Bill is the proud owner of more than 40 antique John Deere tractors, along with many other pieces of antique farm equipment, with many pieces being restored by him. Bill enjoys sharing his knowledge of tractors and what makes them go “putt putt” with anyone, especially our club members. Bill displays many of his collected tractors and equipment at the clubs annual Festival each year.

As our club, EDGE&TA Branch 133, The Maine Antique Tractor Club, celebrates our 25h Anniversary this year, we would be honored to have our Founding/Charter Member, Bill Clark, inducted into the EDGE&TA Hall Of Fame, as one who has made significant contributions to the collection, preservation and exhibition of antique tractors, engines, and equipment here in the State of Maine.