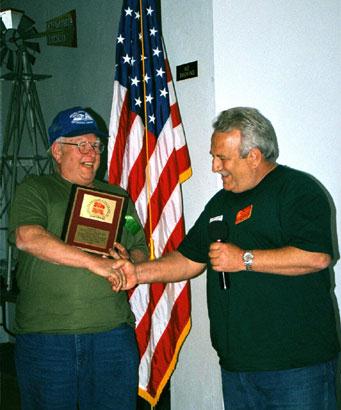 Harvey Hilands, member of Branch 15 passed away from a heart attack on September 1, 2001.
Harvey held many positions as an officer:
1971-1973- Vice President for two years when the club formed as EDGE&TA
1973-1978 – Editor of Branch 15 Newsletter.
1976- Harvey was elected Sec/Treas of the National. He was elected to serve until 1986.
Harvey was also inducted in to EDGE&TA Hall Of Fame in April, 2001.
Harvey’s contributions to the preservation is how Antique Powerland Museum has grown so quickly. His donations of time and money have made several projects manageable. Harvey, being a plumber, donated several hours of work building our first indoor restroom with showers.
Other items and equipment that Harvey purchased for us to use were two forklifts, a road grader, a ditch witch, a backhoe, and three golf style work vehicles to zip around the grounds with. The latest most recent donation for the club and Powerland was paying for a beautiful 150′ x 40′ building for our big engines. Due to Harvey’s generosity, this will allow us to display and run engines all year long.
Harvey was not a person that looked for a “thank you”. He was one of our best supporters and you would always find him working to better the club. What most of us thought of as work, he thought of as play. He enjoyed watching others having fun with their hobbies, and helping them restore and preserve parts of the past.
We would not have accomplished so much if not for Harvey’s outstanding donations and involvement with the club. EDGE&TA & Branch 15 will miss him deeply.